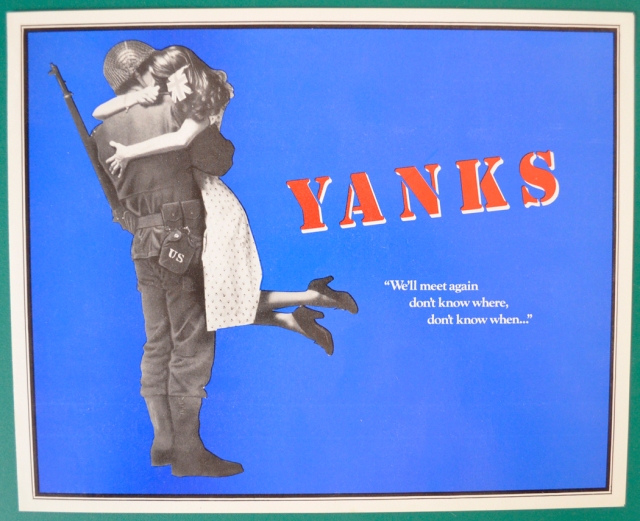 A special screen as part of Keighley Arts & Film Festival celebrating the films with Keighley connections.  Yanks made extensive use of Keighley and Worth Valley Railway and some locations in Steeton!

Matt (Richard Gere) and John (William Devane), U.S. soldiers stationed in England during World War II, are both beginning affairs with British women, but they soon find their romances complicated by moral dilemmas and a clash of cultures. Jean (Lisa Eichhorn), a girl from a working class family, has caught Matt’s eye, and John is trying to woo the elegant Helen (Vanessa Redgrave). However, both woman are already involved with local men who have left for the front.

A original UK cinema release poster of Yanks will feature in an exhibition of films with Keighley connections in the Airedale Shopping Centre.

A story of enduring love between Leonard Cohen and his Norwegian muse, Marianne Ihlen. Filmmaker Nick Broomfield chronicles their relationship, from the early days in Greece to how their love evolved when Leonard became a successful musician.

Dutifully covering the rise, fall and final triumph of Cohen’s career, Broomfield relegates Ihlen to the background of her own story, before bringing her back for the film’s touching final act. .  Ann Hornaday Washington Post

Celebrated war correspondent Marie Colvin is a woman who is as comfortable downing martinis with high society’s elite as she is brazenly staring down warlords and fleeing from gunfire. Driven by an enduring desire to bear witness and give voice to the voiceless, Colvin charges into danger, constantly testing the limits between bravery and bravado.

he director and screenwriter remind the audience not just of the humanism that drives so many reporters, but also the extreme danger they put themselves in to bring us the truth.  Ann Hornaday Washington Post

Charley, a teen living with his single father, finds work caring for an aging racehorse named Lean on Pete. When he learns Pete is bound for slaughter, the two embark on an odyssey across the new American frontier in search of a place to call home.

A coming-of-age story that unfolds gradually, Lean on Pete takes place in what the writer Michael Harrington called “the invisible land” of the poor, a reality too little seen in American movies. Full review Manohla Dargis, New York Times

Set in contemporary Chicago, amid a time of turmoil, four women with nothing in common except a debt left by their dead husbands criminal activities, take fate into their own hands and conspire to forge a future on their own terms.

A comedian uses her own troubled past as material in her stand-up comedy routine, as she tries to break into the comedy circuit by playing Northern England’s working men’s clubs.

It’s the summer of 1983, and precocious 17-year-old Elio Perlman is spending the days with his family at their 17th-century villa in Lombardy, Italy. He soon meets Oliver, a handsome doctoral student who’s working as an intern for Elio’s father. Amid the sun-drenched splendour of their surroundings, Elio and Oliver discover the heady beauty of awakening desire over the course of a summer that will alter their lives forever.

Even as he beguiles us with mystery, Guadagnino recreates Elio’s life-changing summer with such intensity that we might as well be experiencing it first-hand. Full review
Peter Debruge
Variety

An outstanding cast savours performing a play that has stood the test of time. Avoiding sentimentality, this is a valuable rejoinder to those who would sugar-coat mass slaughter. Full review
Andrew Lowry
Empire

Loving Vincent is an experimental animated biographical drama about the life of painter Vincent van Gogh, and in particular, the circumstances of his death.  It is the first fully painted animated feature film.

Every one of the nearly 65,000 frames in this near-lunatic labor of love was rendered by hand with oil paints, following a style intended to mimic that of the master. Full review
Peter Debruge
Variety