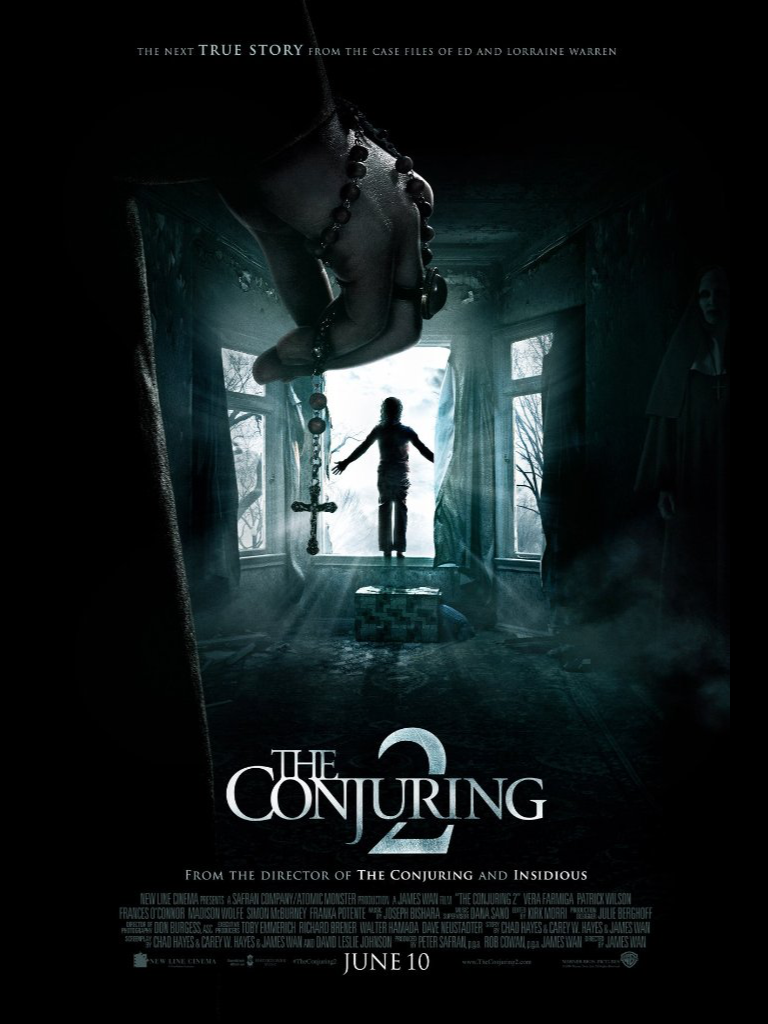 Cast: Vera Farmiga, Patrick Wilson, Madison Wolfe, Frances O’Connor, Lauren Esposito, Simon McBurney, Simon Delaney, Franke Potente,
As a part time paranormal investigator, I had much more of an interest in this Enfield Case as it’s possibly the uk’s best known case. The recent tv three parter with Timothy Spall as intrepid investigator Maurice Grosse reignited people’s fascination with the case of a poltergeist energy which attached itself to one young girl and spoke through her on tape, even though a girls throat is incapable of making such deep tones. It’s a classic piece of evidence.

To see James Wan deliver this tale had great possibilities for me. But being a horror film lover I also suffer from being too knowing about the music cues and other well trodden clues which ruin most scary movies for me. The first Conjouring was enjoyable to me but I never jumped or really felt uneasy in my seat while most of the audience had a great roller coaster ride.

So to have The Conjouring 2 give me shivers in a few parts made me love this movie. Sure enough there are some failings such as the Crooked man which seems more Guillermo del toro than J.Wan. but with so many different types of scare tactics, there’s always something coming along which is likely to hit the spot and tap into your fears. The Warrens are back (which to be honest, I didn’t know had any hand in the case) plus the Marilyn Manson looking dude resembling the demon from Insidious albeit dressed as a nun this time. The use of shadow is exemplary and there are at least a couple of scares which I was left gleeful over. There child actors appear wooden a little until you see what the actual children were like in life- odd, out of it, and practically disturbed by events. All the cast do a good job but special merit must go to Simon McBurney as Maurice Grosse in a role which he nails as this unique man.

There is probably half the movie which you could class as pure Hollywood polish just added to entertain but I was impressed at the details of the case which were implemented especially the neighbours over the road and the police who witnessed activity first hand.

This is the best ghost story horror I’ve seen in many a year and I’ve watched everyone which I can get my hand on.

I see this as a classic.